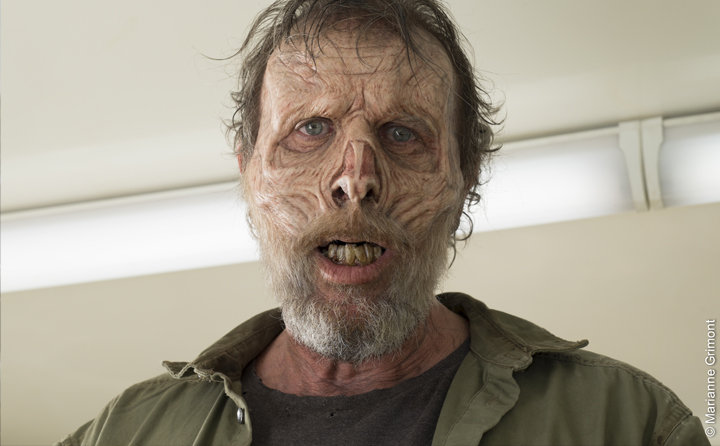 On the set – The Zombie on a Bike

The Zombie with a Bike mixes social film and zombie movie, a false burlesque comedy but a sincere tribute to the Dardenne brothers, is Christophe Bourdon’s first short film.

In fact, the Dardenne brothers, first finally interested, are they aware of the existence of the film? “Sure,” says the producer. “We sent them the script. We have not yet heard back. Well, a parody, we like it or not. But we consider them in any case as two huge filmmakers who have created a unique aesthetic in all cinema. We love their movies, but that does not stop to laugh in this Belgian mind where one loves oneself laughing. We have no other claim than to honor them, to resume the held camera. There is absolutely nothing negative. “Beautiful artwork on the day of our visit, as Frédéric Bodson, who was camping the chief of staff in Rosetta, is found fifteen years later to play a similar scene, the Zombie has of course taken instead Emilia DEQUENNE. “The two fins, complete the director, they do not obtained by chance. Their talent is undeniable. I certainly do not have much, but I give them a fun tribute, much like Mel Brooks would have done in his time, with parodies like Frankenstein or Robin Hood … All things considered, although sure. But I hope they will see it because I’d be curious to have their opinion! “

But The Zombie cycling, can not be reduced simply to a movie or a comedy. As the director indicated in its statement of intent, “There is a social and political discourse on the state of Wallonia and its unemployed. I myself spent [screenwriter] by unemployed again for several years, I know how it can be humiliating and demoralizing to go to Forem. Behind the humor and absurdity of that character that evolves into a social film, so I wanted to show how an unemployed person can be rejected by society, wandering in the middle of the rest of the population by asking how to find its place . As a zombie, undead. “That explains the somewhat human content of Zombie, he has quite deliberately not to make too scary on the screen, especially as the quest for character is more to finding a job that devour humans. In this sense, it was indicated to the brilliant Lionel makeup artists team to think imagine as a model Bill Murray in Zombieland for makeup Olivier BONJOUR.

Some hints clearly autobiographical so for Christophe Bourdon, atypical personality, funny and endearing especially with a keen intelligence. “Even though I’m only 31 years,” adds his producer, “I’ve worked on a lot of shooting and saw a lot of filmmakers at work. So I can certify that he never saw a filmmaker prepare as his film upstream! This has inevitably made things easier during filming and made a great atmosphere in the team; we confirm! -. Just imagine, we even had the incredible luxury complete with … days in advance! “Neo-director, who has gone back to the RTBF in this fall (We are not Pigeons and Ciné Station TV, Children of heart in radio), may well speak of him again soon in cinema, probably in a longer format. And no, “not to carry the child of Zombie Zombie and The Promise,” he said, smiling. “I’m the type to do things by instinct, but sometimes I say no when necessary. Meanwhile, The Zombie bike will be ready for the month of January. ” Complete history of this fantastic loop, logic would we find the film BIFFF in 2015. But considering the topics addressed, the film could well consider a career in other festivals. “And maybe TV, even if the time of the short film still ungrateful. We hope so make the best film possible. Whatever happens, it is done and I oddly found that reality could sometimes be more beautiful than the dreams. “